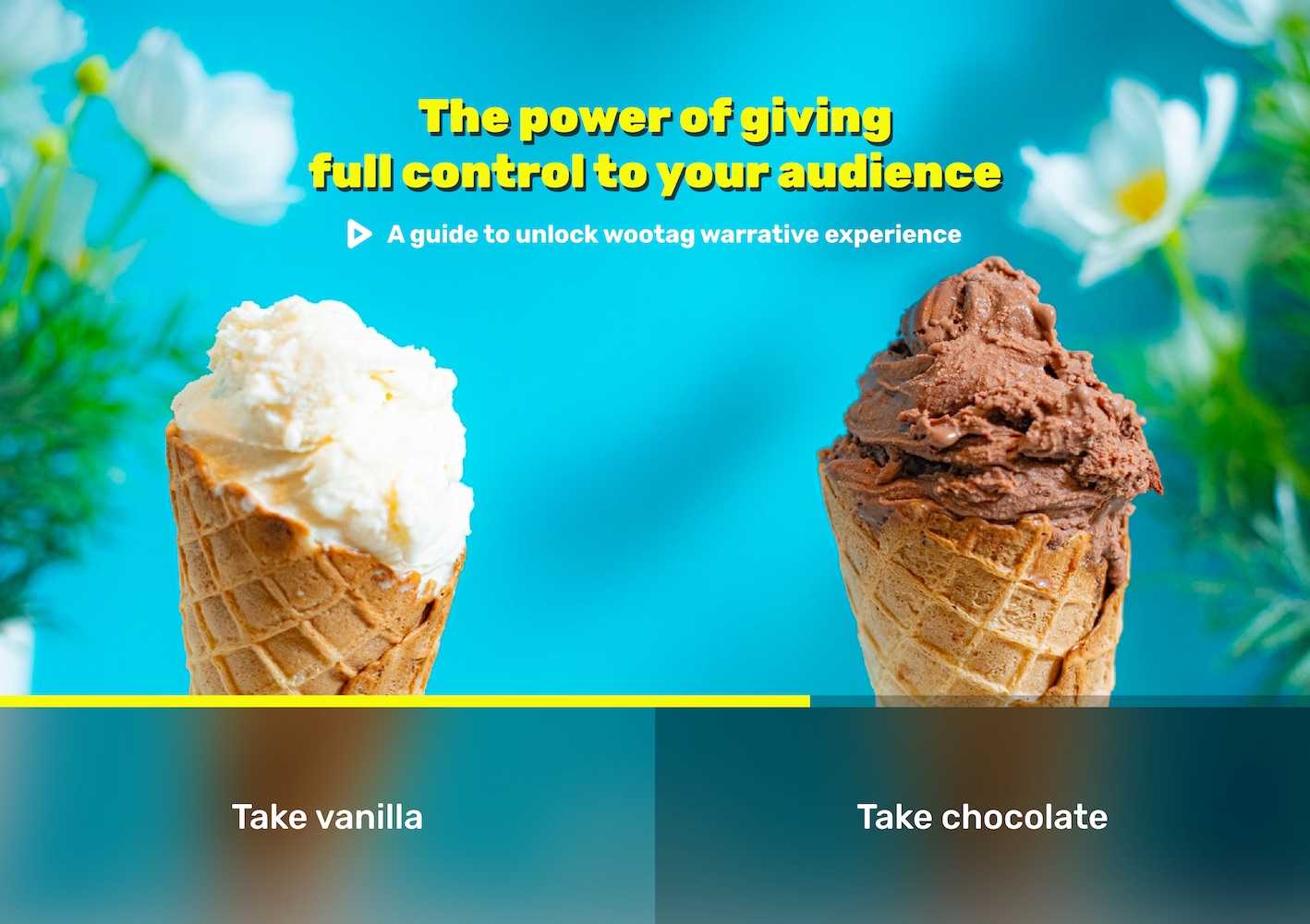 Choices that viewers had to make ranged from choosing the breakfast cereal, throwing tea, to accepting a job.

As a first, the interactive film conditions viewers to make a choice – something that traditional television or film has never done.

Secondly, the interactive video registers the viewer’s choice using “state tracking” technology where a TV set in the scene plays the chosen cereal commercial. For Netflix, the interactive technology provided insights on what their subscribers want from a story and what choices a majority of viewers make for the character in the movie.

The success of Bandersnatch and these insights pave the way for Netflix to come up with tailored content that engages its subscribers in a better way.

Ultimately, the interactive video platform and user-generated data combine to create a powerful marketing tool for Netflix with which it can increase its subscription base and enhance customer experiences.

Lean Back to Lean Forward Transition

While traditional television is called the “lean back” enterprise, interactive video is a “lean forward” experience. Case studies show interactive and immersive experiences increase the viewing time and build loyalty towards the film or content.

Consumer behavior is evolving from the traditional passive viewership or consumerism where the viewer sits down on the couch, uses the remote control to switch on the TV, and settles on the broadcasted video content.

The viewer has transitioned to the “lean forward” media where they are engaged and are actively seeking information. There is an exponential growth in targeted customer interaction that shapes the customer experience, which, in turn, affects how they perceive a brand.

Importance of Users to Viewers Experience

Every aspect of the interaction of the user with a brand, product, or service adds up to create perceptions regarding the brand as a whole. Interactive videos help you start a dialogue with your target audience while encouraging them to be active participants and lean forward instead of being passive spectators. Data shows interactive and immersive experiences result in phenomenal engagement levels.

Interactive video has infinite possibilities as a marketing platform:

1. Overlays and hotspots with visual CTA (calls-to-action) that are attached to objects or moving people while introducing new content when clicked on.
2. Video branching with customised viewer-selected options where your audience gains control over the narrative paths in the content.
3. Interactive 360º viewing where branching, hotspots, and overlaying are combined to provide the ultimate experience to viewers.

Here you can learn more about our thoughts on the importance of transitioning from Users to Viewers Experience.

Trends we are seeing at Wootag validating the transition

Having helped multiple brands achieve their marketing goals through interactive videos, we at Wootag have data that validates the transition to lean forward style of engagement.

While 83% of marketing professionals believe in the importance of interactive video in engaging consumers, 72% of consumers prefer to see an interactive video over text to know about a service or product. We have learnt that interactive videos have three times higher conversion rates, with 1.7% of viewers performing CTAs in an interactive video. Brand awareness rose by 1.5 times, while there was a 4.7-time lift in consideration. Our customers have experienced an increase in sales and realize an optimum return on investment.

At Wootag, we strongly believe storytelling in the digital world calls for the adoption of Bandersnatch-type of immersive technology that encourages innovative thinking and active participation of viewers.

Interactive video is all about driving viewer engagement, boosting conversion, and making the video do all the work.

Part 1 of How did we go about converting 7% of Site Traffic into Leads?

One for the Sports Enthusiasts – Wootag’s Sports Signals

Evolution of Advertising within the Retail Industry

Driving video to integrate your brand

A “How To” on boosting customer engagement on your Videos!

What is campaign optimization and how do we do it?

Best Ways to Use Interactive Videos